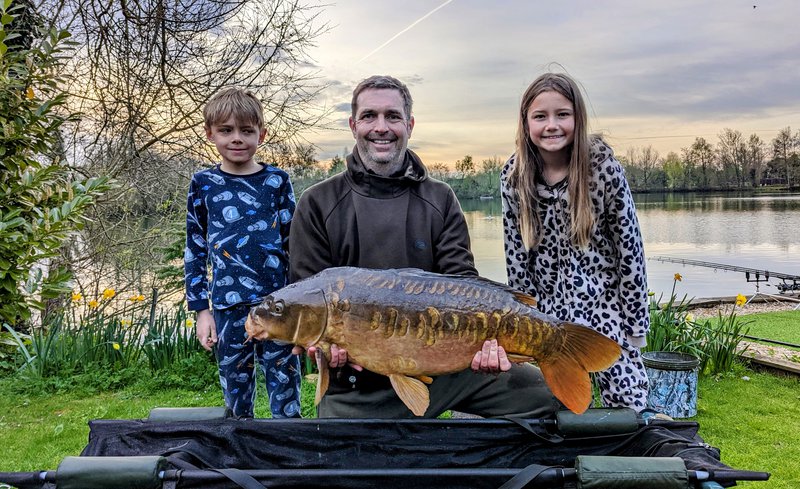 Fishing most definitely picked up a bit this weekend despite the (hopefully) last two frosts of the year.

I am pleased to report that the three anglers on Cherry Lake this weekend all caught. Not many but they caught! A distinct improvement on the previous weekend's uniform blank!

By contrast to Phil Fry who is a regular, Ian Robinson was on his first visit to Cherry Lake. The fishing gods kept Ian waiting until 01.30 on Monday morning before he got a run. He was very pleased with his Common of 27-10 (pictured below)and left hoping to come back again this summer.

Ben Smith stayed in Cherry Lake Cottage and brought 4 kids with him! A better man than me, especially as two were his niece and nephew (to be fair they were all as good as gold)! As a result he largely rested his swim during the day due to being out with the family. He left it even later than Ian Robinson, because he had to wait until 06.00 on Monday morning (just a couple of hours before the end of his session), before he got his only run of the trip. At 29-04 this classic Leney looking Mirror Carp was well worth catching. As you can see from the lead photo above his nephew Harrison and niece Liliana also thought so.

Interesting that both Ian's and Ben's Carp came on/after the only night which was frost free. Hopefully a sign that the Carp are at last moving into their normal Spring feeding behaviour?

The anglers on this week have all made a good start, with Carp to 29lb reported from Cherry Mere and to 21-08 from Cherry Springs. Charlie Knott has been fishing with his dad Stuart on Cherry Pool from Egret Lodge. Charlie was made up with this Ghost Carp of 11-06

Regular Stuart Crafer has returned to Cherry Lake and beat his good friend Steve Keen (who is in Osprey Lodge) to Grebe Lodge. He was quickly off the mark on Monday evening with this stunning 'home grown' Mirror of 22-04. Normally I do not publish pictures of the smaller Cherry Lake carp (under 25lb), but as this is both 'one of ours' and such a stunner I could not resist it. Stuart and Steve, we look forward to seeing which one of you can catch it's grandmother this week!

So far this year we have not seen any of last years 40's, so we are increasingly on tenterhooks waiting for the first forty of the year. Time will tell!