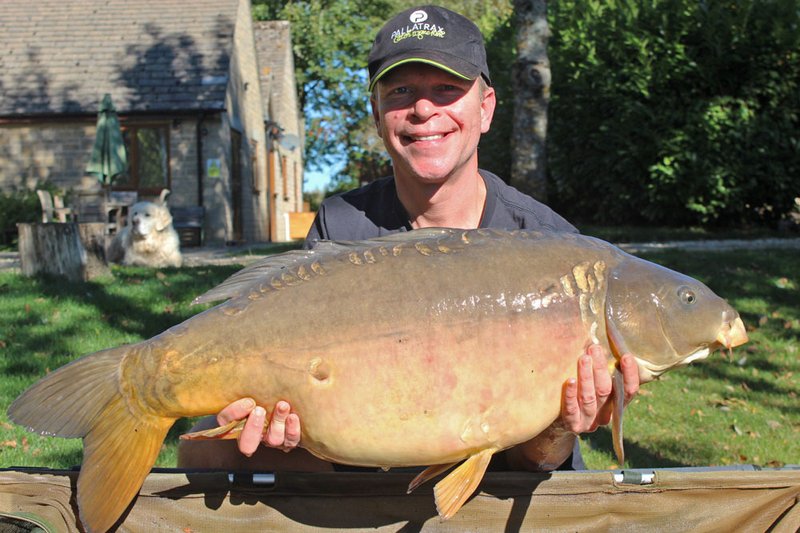 Another 30lb Cherry Lake Carp and seven 20lb+ Carp out of Cherry Springs!

It certainly feels like autumn has arrived here at Cherry Lakes. Whilst the days have been nice and bright, and warm in the sunshine, three light frosts, high pressure and a northerly wind has ensured some tough conditions this week.This was certainly the case on Cherry Lake where it felt like all the Carp had packed their bags and flown off somewhere warmer! Four anglers reported just one fish on the bank and three lost or missed. Tough going indeed.

The one fish that was caught was however well worth catching. We have been waiting to see the Carp photographed above for a while. This long leather like Mirror has not been seen since he (at least I think it is a he!) was landed last October by Greg Harwar at 31-04. This time he was caught by Neil Carey from the Cottage swim at 33-08. Cherry Lakes fish supreme boilie tipped with a pink slice of pop up did the trick for Neil, who was very happy with his efforts. This brings the total of different Carp caught this year over 30lb from Cherry Lake to 25.

It is interesting to note that Cherry Lake has fished very slowly over the last week following the sharp shift in weather conditions and move to high pressure. All three of the Carp caught have been thirties, arguably reinforcing my point in the last update that it is often the bigger fish that feed first in poor conditions. It is even more ironic that the 33-08 Carp, which is at best only caught once a year, gets caught when most of the Carp are clearly not feeding. I think the expression is ‘go figure’!

It is just as well Neil is not a cricketer otherwise he might have been superstitious about becoming the 111th (Nelson!) member of the Cherry Lakes 30+ club. Hopefully his new 30+ club polo shirt will bring him good Carp fishing luck!

Martin and Suzanne Eagle, who are good friends and regulars at Cherry Lakes, have been staying in Kingfisher Lodge on Cherry Springs this week. The fishing started slow, which was not surprising given the weather conditions. Having read about Richard Mascall’s amazing recent haul of 74 carp on our Dairy-Cream boilie, Martin has sensibly been using this bait. Unusually Martin has fed the same couple of spots all week consistently with Hempseed (with just a few boilies over the top). As a result he has managed to build his catch rate progressively through the week. Amazingly of the 7 fish caught today, five have been over 20lb. He has had 7 twenties out of a total catch to date of around 15. He has had three over 26lb, two of which are shown below.

When Richard Mascall recently caught so many from Cherry Springs(74), some 60+ of these Carp were doubles. I remember  saying to Richard that the smaller Carp(doubles) were not giving the bigger ones the chance to find the bait. This week it is clearly the bigger fish which have been feeding.

I think it is primarily the fishing conditions, rather than the hempseed which has obviously played it’s part, that has resulted in the bigger Carp feeding first. Hence Martin’s amazing average. For those of you familiar with the ‘baiting Pyramid’ theory (I think this was first written about by Mike Wilson…someone please correct me if this is wrong….in short the bigger fish move the smaller ones out of the way….particularly when feeding on particles) you might argue some of this theory is also reflected in Martin’s results. Either way, well done Martin…..top angling.