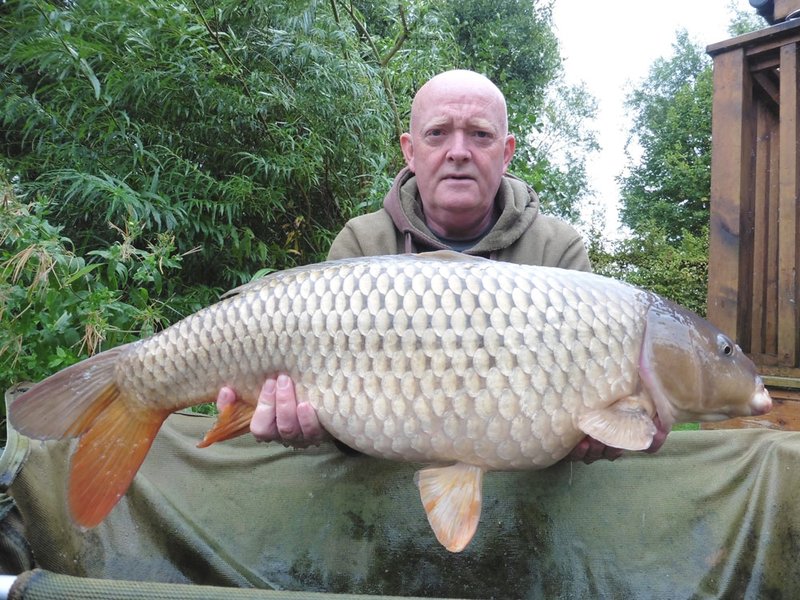 He lands 74 Carp from Cherry Springs.

Richard Mascall and his wife Michaela have been on a return visit to Kingfisher Lodge on Cherry Springs this week and he has smashed the record for the most fish caught in one stay.

As flagged in my last update Richard has been catching consistently throughout his stay and  caught an amazing 74 (yes seventy-four Carp). All bar one of his fish has been caught on Cherry Lakes Dairy-Cream boilies. Richard’s tactics have been simple and very effective. He simply casts a single bait to his target spot and then fires 20-30 boilies around the hook bait and sits back to await a run. When he lands one, he simply repeats the process.When I watched him it was even better than this, because he was getting Michaela to go down the bank and she baited over the top of his hook bait. Impressive……..and I am sure I could not persuade Judith to do this for me!

Richard has caught 5 twenties in his catch of 66 Carp, just below the 1:10 rule of thumb target we have. I think this is because the Carp have all been feeding so well on Cherry Springs that the doubles have been beating the twenties to his hook bait. Richard also caught 5 single figure Carp, meaning he has had over 50 doubles! Very well done Richard and Michaela.

Pete Brown has been on his first visit to Cherry Lake over the last week fishing in Grebe Lodge. Given that Cherry Lake has fished slowly for other anglers he has done very well to land 11 Carp throughout his stay. The biggest a 27-08 Mirror and a Ghost Mirror, which his partner Ameila has christened ‘Casper’, of 21-08 are pictured below. His successful tactics was not to fish on the shallows, but off the bottom of the drop off from the long bar. He also caught off the tree line when it was raining. Well done Pete.