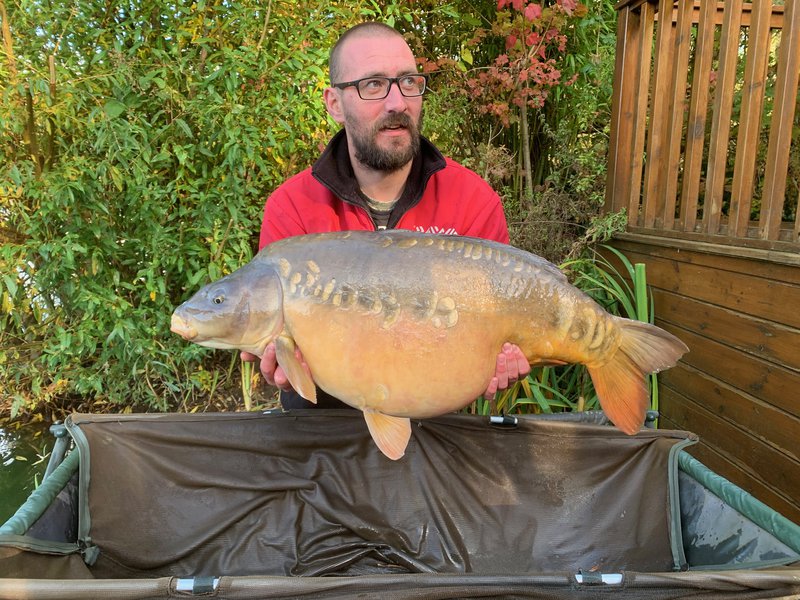 The 36-08 Mirror made the drive down from Scotland worthwhile

I am going to stop writing about Cherry Lake fishing slow given we are now approaching the end of October. A few Carp a week has been the norm for October and I will be delighted if this keeps up during November after the first frosts inevitably arrive.

We are much busier than normal in November and December, running up to Christmas. A period which I think, once the frosts arrive, is probably the hardest time of the year. I have done my best to talk down catch expectations for this period, but I am worried about many guests being disappointed about their catch returns. Most guests tell me, that given the on-going strange conditions caused by the Coronavirus and the actions being taken to control it, they are just desperate for a break in the relatively safe environment of Cherry Lakes. Let's hope they enjoy the beauty of a frosty morning!

This week we have had 6 Carp landed from Cherry Lake including a cracking couple of thirties. The biggest of the week was caught by Scott Brown fishing from Grebe Lodge.

Scott and his lovely wife Laura are real heroes as they travelled all the way down from Scotland for their Monday to Friday stay. Scott stayed optimistic as the days ticked by with no real action, although by Thursday morning when I saw him he did say that 'he was running out of time'. I think he also mentioned that his mates were 'taking the Mick' as he was blanking.

Shortly after I left he, I happened to glance up when I was walking along the car park bank and could see he was into a Carp at last. Scott did not make any mistakes and after a few minutes he was very relieved when the Carp slipped into the net being held by fishery manager Dave........who immediately pronounced that he had landed a thirty!

On the scales this impressive Mirror came in at 36-08, and Scott was over the moon. Punching the air with joy, as he had smashed his PB. Laura mentioned that the Carp don't grow this big in Scotland and this 'made the journey more than worthwhile'! This lovely Carp has a lot of small star burst scales as well being a half-linear. This Carp was caught in February at 38-08 by Charlie England, so I assume, as it looked so good, it is in the process of putting weight back on having successfully spawned last summer.

Scott became the 191st member of the 30+ club and went away this morning wearing his 35+ Hoody! I think he also enjoyed sharing the news of his PB Carp with his mates! Well done Scott.

As we missed out on several fishing breaks this year, my regular fishing buddy Chris Hughes came and spent a few days fishing on Cherry Lake. We started on Monday fishing from the Cottage swim, when Chris caught the smallest Carp in the lake, a stocky 'Italian shaped' Common of about 5lb. With a monsoon forecast for Tuesday evening /Wednesday, I played my 'owners privilege card' and moved to fish the Cottage water from the decking in front of the house. It worked for Chris!

On Tuesday afternoon, Chris landed this lovely Common of 33-02 above (this fish was landed last February by Andy Watts). Now the downside for me of fishing from the house is that I inevitably get drawn into doing jobs, so when my chance of the couple of days came he was in charge of the rods. As a result he can be seen with this bonny 26-03 heavily scaled Mirror. I was pleased for him.................honest!

Jason Barnes-Smith stayed with his Grandad Bob in Pochard this week and did very well. He landed 20 Carp including three twenties including a night caught Common of 24-08 and this Mirror of 22-08.

Top angling Jason keep it up!