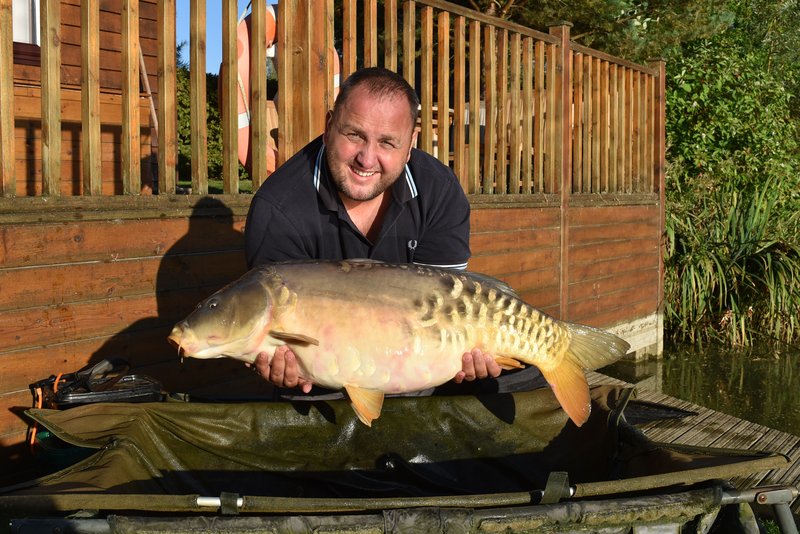 Alan Burford and Wayne Davies have just finished a great weekend on Cherry Mere. They shared an impressive 20 Carp between them, all caught on Cherry Lakes Bio-Fruit boilies. Although Wayne caught 11 Carp, it was Alan who landed the two biggest Carp. First came a 24lb Mirror which set a new PB for Alan and then on Saturday morning, just as I was passing, Alan became the 147th member of the Cherry Lake 30+ club when he landed a Mirror of 32-04. Well done both.

This is the second Carp above 30lb to be caught from Cherry Mere during September and follows Alan Waddington's lake record Mirror of 32-08 which was landed earlier this month . I have repeated a photo of Alan's fish below to easily confirm they are different Carp. I have been scouring the future bookings calendar to see if any other 'Alan's' are visiting, as having the name 'Alan' seems to be the magic ingredient to land the 30's from this lake!

As regular followers of these updates know, I rarely get good photos sent to me by guests who have been staying in Egret Lodge on Cherry Pool. I am delighted to say that Mark Hardy has sent me a couple of good ones of his fishing partner Mandy Gray following their visit this weekend. The first is of a lovely Crucian Carp of around 2lb....

and the second is of a very lean Ghost Common of around 10lb. Well done Mandy and thanks Mark!