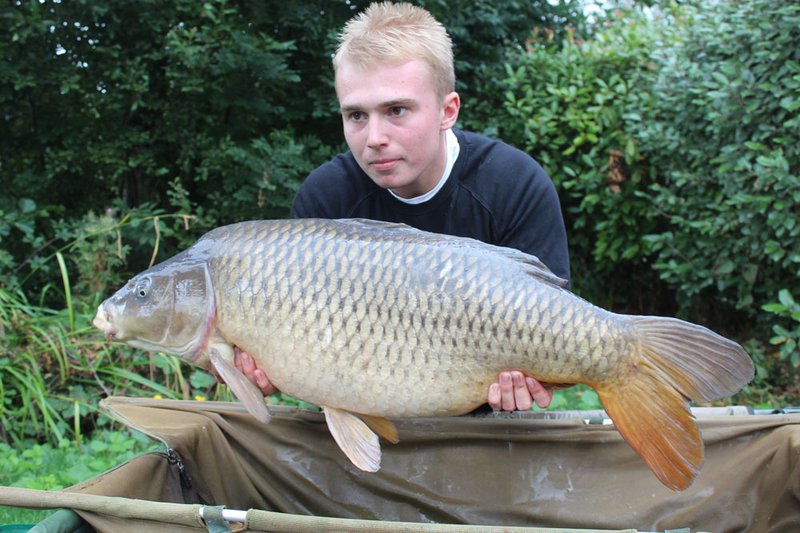 Apologies for the prolonged radio silence as I have been away. I have missed some good catches by anglers and I will no doubt fail to mention some captures which I would have featured under ‘normal service’. Apologies to any guests who feel they should have been mentioned. I will split the update into two. One for Cherry Lake (see below) and the next for the other lakes. As you can see I have too many good photos to publish!

Over the last three weeks we have had 7 Carp over 30lb reported by 5 guests withe two catching a brace. The running total of different properly photographed and weighed Carp in 2018 now stands at 23.

Father and son team Ken and Kristian Clarke stayed in Heron Lodge for a week and caught consistently throughout their stay. Dad Ken landed a 30-02 Mirror Carp, which I am pleased to say is a new thirty for us. Kristian was not going to be over-shadowed by his Dad so he went and caught two over the magic mark. A lovely Mirror of 30-07 and a Common of 32-08. Both of Kristian’s thirties are pictured below. The Mirror is another new thirty for us in 2018. Mark also landed a Common Carp of 32-08. This is a known thirty but one which is quite elusive and was on it’s first visit to the bank this year. Together both Ken and Kristian increased our running total of different thirties caught in 2018 by three to 23! Both became new members of the 30+ club in doing so. Well done guys.

Andrew Johns spent 4 days in Grebe Lodge and managed to break the 30lb barrier on his first visit to Cherry Lakes with a Mirror of 31-05 and became the 108th member of the exclusive Cherry Lakes 30+ club.. This was also a new thirty for us further increasing the running total for 2018 to 24.

David Reynolds and his lovely wife Julie are good friends and are regulars on their 9th visit to Cherry Lake and stayed this time in Osprey Lodge. David landed 12 Carp during his latest stay including a Ghost Common of 31-15 and a Common of 30-12. Unfortunately the photo of the second Common is not clear enough to allow for accurate recognition so I am assuming this has been out before in 2018, which was the case for the Ghostie.

Chris Madden was on his second visit to Cherry Lakes this weekend staying in Cherry Lake Cottage. Chris joined the Cherry Lake 30+ club with this lovely Mirror (pictured below) of 32-02. Unfortunately I forgot to give him his club polo shirt, sorry Chris please remind me next time!  Chris caught his fish on a snowman rig fishing a KARPER RS boilie topped with an Ultra-Fluro pink Shrimp and Garlic pop up.

I have also included Michael Gorst’s 29lb Mirror which he caught from Grebe Lodge. As regular readers know I love Ghost carp, and in particular Ghost Mirrors, and I could not resist it! Well done to all the anglers mentioned above

Given how many of our previously caught high 20′s are now coming out over 30lb, plus there are a handful of known thirties which are yet to be included in my catalogue of 2018 30′s, I am raising my target to 30 different 30′s by the year end…..which has a nice ring to it don’t you think! Time will tell!