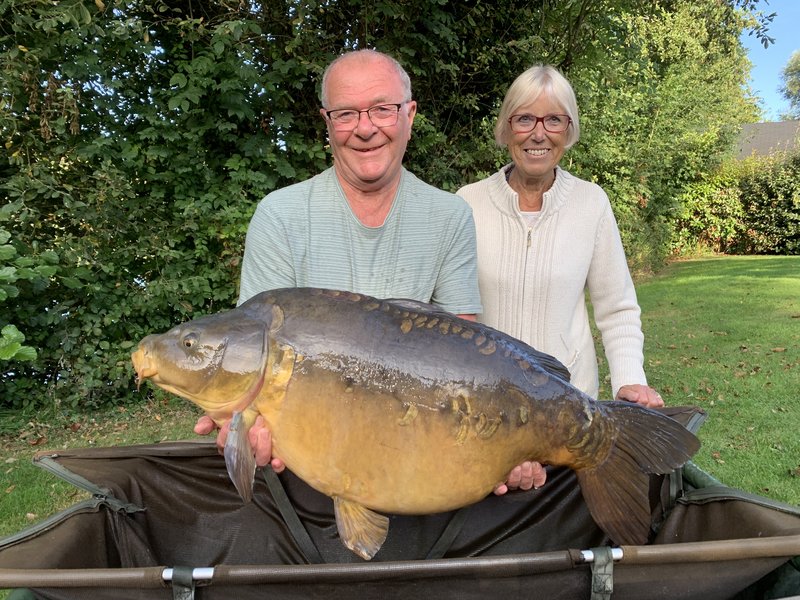 Cherry Lake has been quite slow this week. The high pressure, bright sunny days and cool nights have made it relatively hard going for the anglers this week, with six anglers sharing 9 Carp.

I have noticed before, and particularly in the Autumn and Winter, that when only a few Carp are being caught it is often the bigger ones which are doing the feeding. This very much proved to be the case this week with 5 of the 9 Carp caught being over 30lb. Cherry Springs was slow this week but strangely Cherry Mere fished very well for Andrew Pike (see below).

The Davies family staying in the Cottage have landed two of the thirties, but as their session has not finished yet, I will save their story until my next update.

The 'stars of the show' this week have been the Sheppard fishing duo......David and Maureen Sheppard. David and Maureen have been on their 5th visit to Cherry Lakes and have been staying in Heron Lodge. They have done well on their previous visits and have fished three of our lakes. Indeed Maureen's previous PB, a 19lb Common was caught from Cherry Springs.

The fishing was not easy this week as I indicated above. Over the course of their stay they shared three Carp. The first to catch was Maureen when she smashed her PB at 08.00 on Wednesday morning with a fantastic 34-08 Mirror Carp. This is the second biggest Carp landed by a lady angler, and she smashed her PB. Maureen also became the 144th member of the 30+ club. Spookily Teri Brebner caught the very same Carp at 35-04 earlier this year. It must be one of those Carp which responds to 'female pheromones'! David can be seen holding Maureen's Carp in the photo above as it was nicely too heavy for Maureen.

To say Maureen was over the moon would be an under-statement! David whilst being pleased for Maureen could be heard muttering under his breath 'serves me right for bringing the wife fishing'. You see Maureen always seems to catch the biggest Carp when they go together .

On Thursday morning, again around 08.00, David caught the biggest Carp of the year from Cherry Lake when he landed 'Dick' at 42-04. 'Dick' is a fabulous female Carp which is the current lake record holder. 'Dick' was named by Paul Mitchell when he caught her last year at '44lb' (the same weight as Clarissa....Dick Walkers record Carp caught in 1952 from Redmire). Paul caught Dick on 11 October, a month later than David's capture this year. I suspect with another hard month's feeding 'Dick' would have been close to, if not above, the record weight. If she gets caught again later this autumn, we will know.

'Dick' is the third different Carp over 40lb to be caught from Cherry Lake in 2019.

Not surprisingly 'Dick' was also David's UK PB. He joined the 30+ club as the 145th member and qualified for a prized 40+ club fleece which he was well pleased with. He went on to land on the last morning a 28lb+ Mirror and they left very happy (which I think comes across in their photos).

David and Maureen chose to largely target the middle part of the lake of Heron's water. They fed some pellet and Cell boilies, with I believe single bottom hook baits doing the business. Well done to you both and see you again..

Neil Draper and Gary Sullivan stayed in Grebe Lodge on their first visit to Cherry Lakes this week. They shared a fish each, with Neil landing a 23lb Carp, followed by Gary catching a 30-12 Mirror during Thursday night. In doing so Gary became the 146th member of the 30+ club. He was very happy to receive 'the shirt' and they have already booked for next year. Unfortunately Gary struggled in the dark to hold the Carp for the photos, so I stepped in for a quick one (pictured above). As far as I can tell this is a new thirty for us, but as I do not have a reasonable shot of both sides, I am not adding it to our 30's catalogue.

As indicated above Andrew Pike stayed in Pochard Lodge this week, and despite the conditions did really well. He landed some 32 Carp, including 15 doubles and 6 twenties to 29-03. During his stay he broke his PB three times. 'The best fishing holiday ever' was his departing statement. Next year he is going to chance his arm on Cherry Lake. Well done Andrew and next year we will get you a good photo of you holding your next PB!