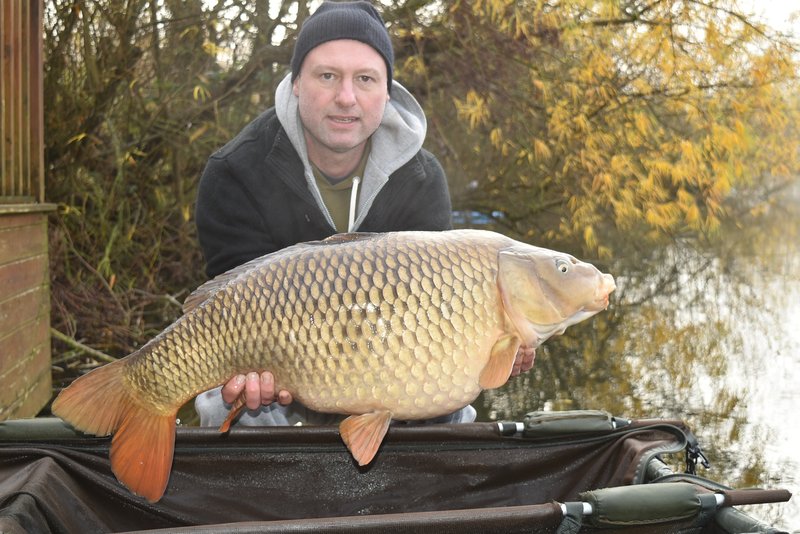 As promised, here is the second of my updates covering the last couple of weeks whilst I have been away. Although in truth most of this reflects the last week or so.

As you would expect all of our lakes are slower than in the warmer months, and in general anglers have to work much harder to catch. But as the Owen's showed (see my last update) as well as the anglers below, the Carp are there to be caught. I always think that any winter Carp is worth 10 caught in the warmer months.....but that is just me!

Ian Ford was on his second visit to Cherry Lake when he stayed in Osprey Lodge last weekend. I am delighted to say that Ian caught a beautiful Common of 30-06 to join the Cherry Lake 30+ club as it's 159th member. Ian followed fishery manager Dave's advice to fish a spot close in to the near margin and used a small scattering of small baits to entice the fish. It was Ian's only Carp of his visit, but talking to him it was obviouse he was pleased to catch even one given the temperatures got down to -4C.

This particular Common Carp, normally comes out around 30-32lb and is one which does put in appearance during the winter. Hopefully we will see her in the new year.

Darrin Scott Jones followed Ian into Osprey Lodge this week, and was on his first visit to Cherry Lakes. Despite the very cold temperatures he had his first Carp within an hour. Fishing a single boilie over boilie crumb close to the far bank reeds, he had this delightful 27-08 Mirror below. He left very pleased with his first visit. Well done Darrin and Ian.

Peter Webster stayed in Egret Lodge on Cherry Pool this week. Peter was on his 5th visit to Cherry Lakes with his lovely wife Lynne. Peter caught on most days, which is typical of Cherry Pool. Cherry Pool is a great winter water, as there are other species to be caught such as specimen Perch and Roach even in the most severe of winter conditions, as well as plenty of hungry Carp.

Peter kindly sent through photos of his two biggest which can be seen immediately above and below. Unlike the Carp in our other lakes which are generally well proportioned, these Carp are leaner. The sheer number of fish in Cherry Pool means that it is hard to get enough feed into them....hence why it normally fishes well. Well done Peter and see you next year.