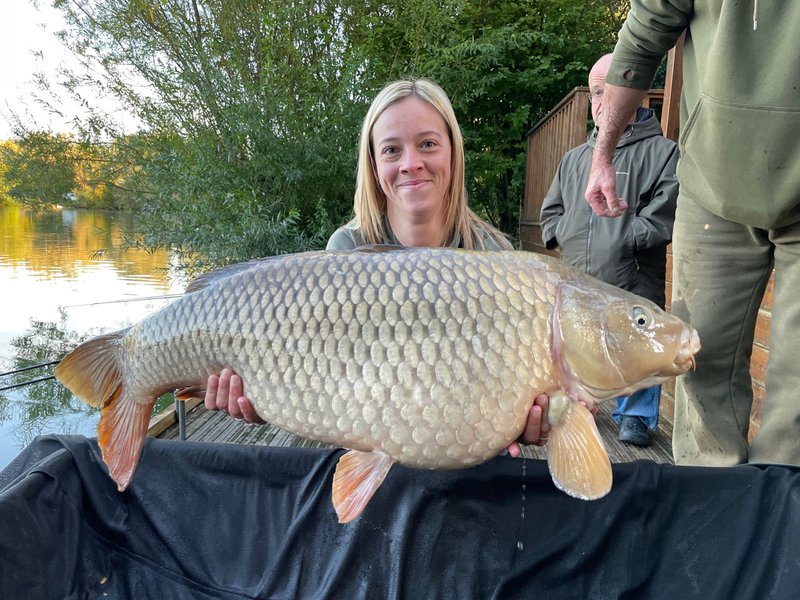 After a mad week or so whilst I was away, typically things slowed down on my return and we have had a much normal and quieter time across the fishery. The recent heavy rains has led to an influx of colder water which we think has slowed the Carp down, at least for a while. It is not the rain falling into the lake which is the reason for the drop in temperature, it is more the fact that the adjacent River Churn is higher and driving up the local water table. This results in a considerable volume of new colder water being 'squeezed' through the ground into and through the lake.

The other thing that has been interesting over the last week is that the Carp in both Cherry Lake and Cherry Springs seem to be more active during the night than during the day. Normally the days are more productive than the nights.

My long term friend Brian Willis had 6 Carp from Cherry Springs to 21lb, all of which came over three nights between 03-05.00 (not very sociable). The successful bait being the house Bio-Spice.

Similarly regular Neil Ash landed a couple of 28lb Commons during the early hours of Tuesday and Wednesday night from Heron Lodge on Cherry Lake, but saw no real action during the day.

The only 30 of the week from Cherry Lake, caught around dawn, came to the fishing team of Stacey Morris and Brian Poole who were visiting for the first time and staying in Grebe Lodge. They only had one Carp, but they were delighted with it, a 30-08 Common. This was a personal best for the pair, and the Common was considerably bigger that anything Stacey had held before. The lead photo above, shows that Stacey is a 'natural' Carp handler after a quick instruction from fishery manager Dave. The shot immediately above shows the Carp being held and demonstrated by Dave and is flanked by Stacey and Brian. They have booked to return next year, this time to Pochard Lodge on Cherry Springs after witnessing Jason Barnes exploits, which are detailed next below. Well done Brian and Stacey.

Whilst Cherry Lake and Springs had switched into 'night-only' mode, the same could not been said for regulars Grandad Bob Smith and his Grandson Jason Barnes who had a fabulous time fishing from Pochard Lodge on Cherry Mere.

Jason fished on the left hand side of the decking, which is normally the best side, and caught from 'the off'. He had action from the middle part of the lake as well as the more obvious marginal areas. Girlfriend Chloe also said she enjoyed her week, and it is thanks to her that we have not only good records as well as most of the photos.

Although Bob was more than happy to let Grandson Jason take the Lion's share of the action, he had some good fish to over 20lb as well as this very distinctive Koi like Ghost Common of 14lb.

Well done Bob and Jason and see you next year.