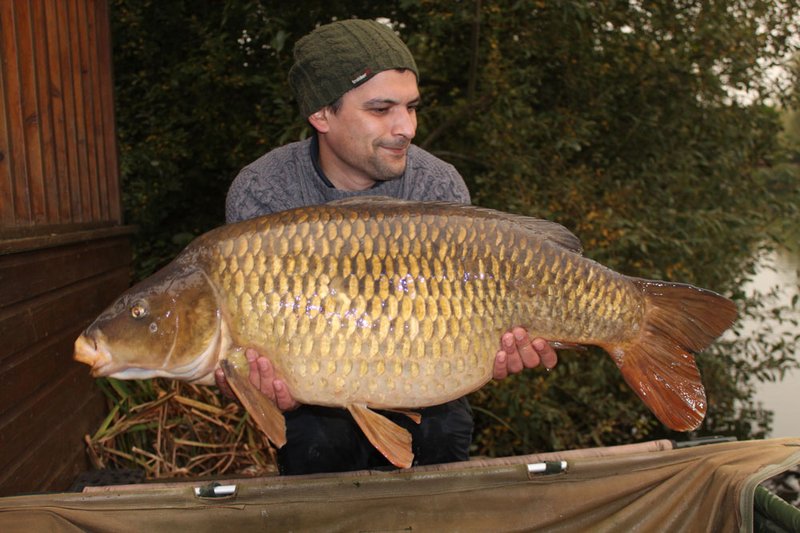 The fishing has continued to be below par over the last week or so across all of our lakes. The combination of high pressure and falling temperatures resulting in the Carp playing harder to catch than normal.

As normal, Carp continue to be caught on our smaller exclusive lakes. The best return this weekend being from Mark Swaite who stayed in Pochard Lodge. From memory he landed 12 Carp, including three over 20lb’s. He had most success by feeding boilies extensively around the middle part of the lake and on Sunday manged six. Sorry but I do not have any photos of Mark’s fish. I have however included a Cherry Mere photo below. This one was sent to me by Sandra Pike showing her son’s new PB which was caught at the end of September. Andrew was delighted with his 21-04 Common.

Cherry Lake was very quiet this weekend with only one Carp being landed. A lovely fully scaled Mirror of 18lb to Steve Shepherd in Heron Lodge. Following his amazing exploits last Tuesday (a 37-12 Ghost Mirror, a 31-04 Mirror and a 29-06 Common- see my last update for full details), Steve did manage one other fish. On Thursday he landed his third 30+ of his trip when he landed this 33-04 Common below. I think this Common was last out in May at a similar weight.

In catching his third Carp over 30lb’s in one trip, Steve joins a very exclusive group of anglers who have landed 3 x 30+ Carp in one go. Well done Steve. His wife Helen reminded me that Steve has now got four chances of being ‘pulled out of the hat’, when we do the prize draw for a free holiday break for all those anglers that have caught a Cherry Lakes 30+ in 2018. This prize draw will take place  just before Christmas.

Regular followers of these updates will recollect that we said we would run two prize draws to celebrate Cherry Lakes 5th anniversary. We have also just undertaken the prize draw for all the guests who visited Cherry Lakes during 2018 up to the end of September. I am pleased to confirm that Paul Jennings was the winner of this draw and will be visiting us in November to ‘claim his prize’!