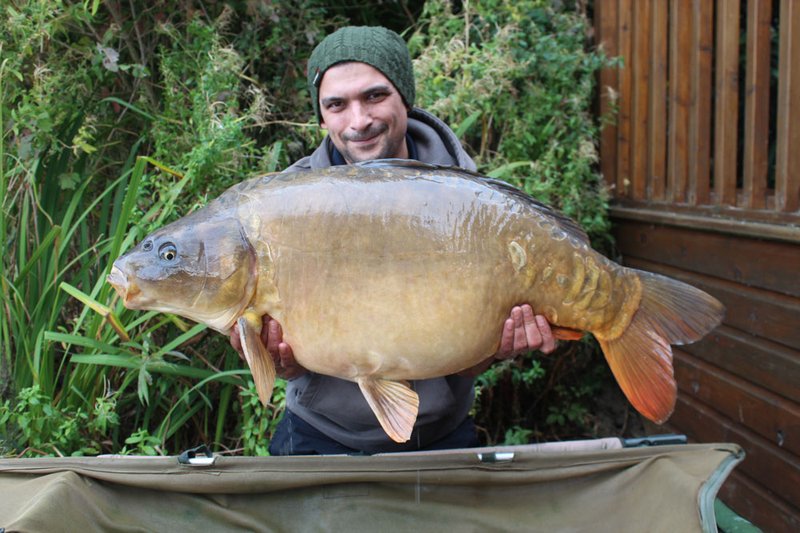 Steve Shepherd and his lovely wife Helen returned to Heron Lodge on Cherry Lake for their second visit of the year yesterday (Monday), and he quickly picked up where he left off earlier in the year.

In March, Steve managed three Carp including ‘The Patch’ at 38-12 pictured below. In catching this Common (which has not been caught since) he smashed his PB by 10lb and claimed his 35+ club Hoody. In fact when he turned up on Monday he was wearing his Hoody with pride. This was obviously noticed by the Cherry Lake Carp because they have really performed for him during the first 24 hours of his stay!

Steve decided to concentrate on a couple of clear spots around the middle of the lake. Interesting these spots were still as clear as they had been in March. He baited these areas and fished pop-ups over them. This shows the value of writing down distances (number of wraps and line) in a fishing book.I need to because I don’t seem to be able to remember anything these days!.

His first Carp came at 02.00 this morning and was a Common of 29-06. This was followed at first light by a chunky Mirror of 31-04. It was a real pleasure to get the early morning call and to be able to be there to both weigh and photograph this fish for Steve. I was even more pleased because I did not recognise this Carp as one of our known thirties. Indeed having since compared photos I can confirm this is our 26th different Carp over 30lb this year.

At 11.00 Steve caught his third Carp in some 9 hours, and his second thirty of his visit! As you can see he smashed the Cherry Lake record for Ghost Carp, with this Ghost Mirror of 37-12. This is one of two big ‘missing’ Ghosties which had not previously put in an ‘appearance’ this year. She was last caught in October 2018 at 36-02, and despite obviously feeding well she has avoided capture so far this year. Her capture represented the 27th different Carp over 30lb from Cherry Lake for the year.

I am confident we now have well over 30 x 30′s in Cherry Lake. Time will tell if we can meet this ‘symmetrical round number’ within proven captures before the year end. Given the strong weight gains coming through, we also think we have at least 3 Carp which should be currently over 40lb including ‘The Patch’ landed by Steve earlier this year. We just want to see them on the bank!

Well done Steve on an amazing start to your week. Top angling! Let’s see if you can land one of the bigger Carp and break the 40lb barrier!