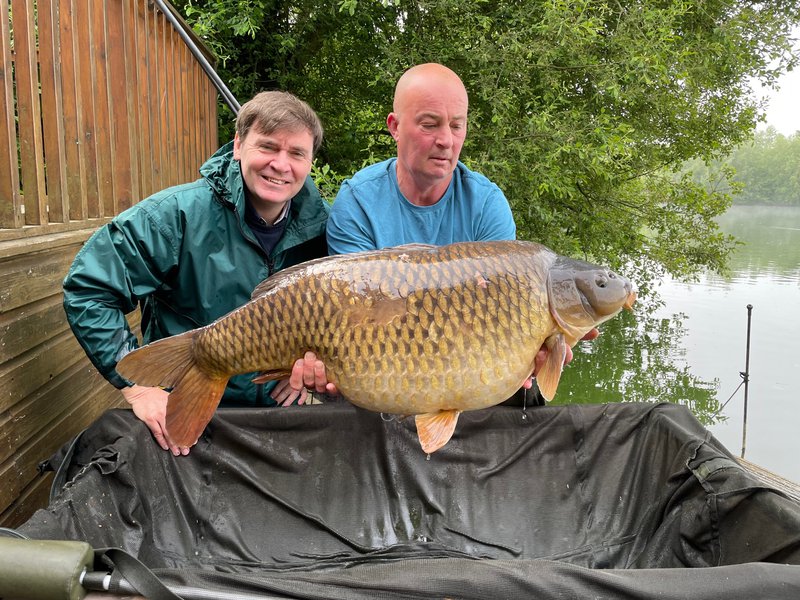 We are delighted to report the capture of two of our 'A' team Carp in the space of a couple of days. It is also good to report about some good Carp handling and care.

Peter Callow decided that he wanted to 'graduate' from the smaller Cherry Lakes complex lakes, and have a 'go' for one of the high twenties or thirties in Cherry Lake. Both Dave and I spent time with Peter after his arrival. We discussed the Carp handling and safety video on the website, and in particular the importance of ensuring all Carp are only lifted from the water in the retainers. Lifting in the retainer ensures the weight of the Carp is evenly spread and the weight is taken by the retainer arms.

Peter called me around 07.00 to say that he had caught a big Carp, which smashed out of sight anything he had caught before, and which was safely in the retainer. Given it's size he had simply left it in the water in the retainer whilst calling us. I collected Dave (who was in early) and went around to Heron Lodge expecting to see a nice thirty in the retainer. It quickly became obvious when we peaked into the retainer that it was a very big Common. the only question being.....'which one'?

With Dave struggling to lift the retainer out of the water we thought it might be 'The Patch' (the biggest Common in Cherry Lake), but quickly realised it was 'The Scuff'. The lead photo above clearly shows why she is so named!

This Carp is not often caught. When she was last caught by Oliver Wells in April 21 at 42-00, it was her first appearance for two years and the first time she had been weighed at 40lb+. This time she took the scales down to 45-12. Comparing photos she has both obviously grown as well as carrying spawn.

The size and weight of the Carp was such that Peter was struggling to hold it properly. Hence Dave stepped in to ensure she could be photographed properly for Peter and us. What a fantastic Carp. Most definitely one I would like to catch. She swam off strongly when returned, still in good condition thanks to proper fish handling.

Peter caught 'The Scuff' from a plateau some 80 years out towards the left hand reed bed. He used a KD rig, and baited with a single Cherry Lakes Tangerine Squid boilie. This boilie is a new addition to our range this year. Well done Peter.

This is a tale of two forties. The other big Carp being the current lake record holder 'Dick', which was caught by Tom Etchell. Tom took advantage of an unexpectantly empty Grebe (we had a late Covid cancellation) to grab a couple of days fishing.

Regular followers of this 'Latest News page' will know that 'Dick' as well as being the biggest Carp in lake is also prone to having her pectoral fin damaged when being taken into and out of the water. I am delighted to say that her pectoral fin is in much better shape than when last seen just a month ago. If you look carefully at the photo below you can see that the pectoral fin has grown back together. The seam of almost clear material (it reminded me of 'clear sealant' used around, say, a shower from a sealant gun) has restored the pectoral fin to its normal integrity. A year ago when it was badly broken, I seriously thought about whether to cut part of it off. Charlie England who was fishing with us at the time, persuaded me not to. I am glad I took his advice!

I am amazed at how quickly this fin has repaired in the last month. I suspect this is due to the top quality feed given to our Carp and the warm water.

Tom who has also watched the safety video before arrival, also carefully used his retainer to lift 'Dick' out of the water. This coupled with careful fish handling in the retainer and during photographs, ensured 'Dick' was returned to the water in good shape.

Tom fished to one of the mounds, in about 4-5 feet of water, some 30 yards directly in front of Grebe Lodge. He used DK 15mm SL fishmeal boilies as his bait. Interestingly both Peter and Tom used bottom baits to catch their two fish.

I will confess that when I first saw her, I thought she would break her own record weight of 49-12, and become our first 50lb+ Carp. On the scales she went 48-08. Given she is clearly carrying some spawn, this might be her top weight, and that she is not destined to be our first 50lb+ fish. Time will tell for her and us. Well done Tom.

The capture of these two big Carp brings the running total of 40lb+ Carp from Cherry Lake to 4 so far this year. We are still waiting to see two of the 40lb+ Carp from last year. We really want to see one of my favourite carp, 'The Pretty One' as she should be comfortably over this benchmark if caught before spawning (and possibly over it if caught later in the year). We believe 'The Patch' the lake's biggest Common which was caught last year at 46-12, should be the biggest Carp of the year when caught, and might be 'the one' to break into the fifties for us. Fingers crossed!