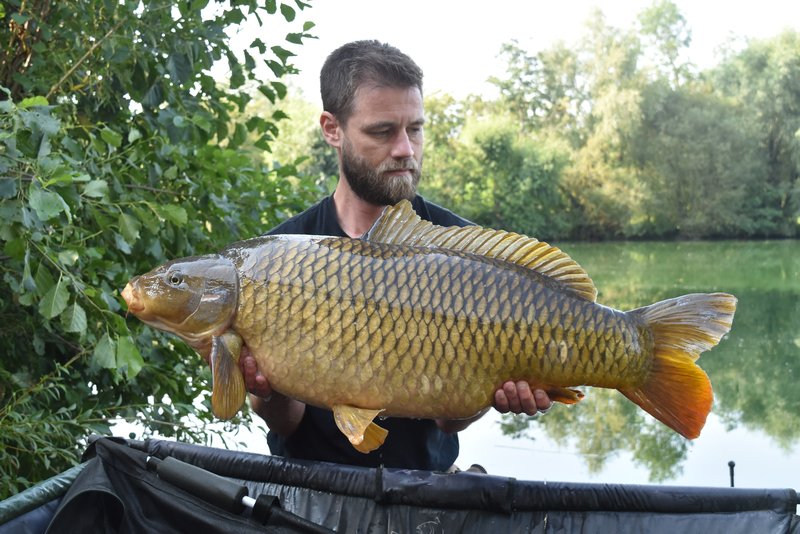 Three 30lb+ Carp including one from Cherry Mere

Cherry Lake has produced 14 Carp so far this week including two 30+ Commons. The lions share of these have been landed by Rix Huxley who has been staying in Grebe Lodge on his first visit to Cherry Lakes.

Over the space of just 8 hours between 02.30 and 10.30 on Tuesday morning Rix landed a brace of Commons over 30lb. Fishing with pellets and a small pink pop up, he landed the first of these, a 31-01 Common in the early hours of the morning (see photo below). This Carp was followed up by an even bigger one, a Common of 35-04 at 10.30. As you can see from both the main photo above and the one immediately below, this Carp was two tone in colour. I have seen several Carp over the recent months which have been two tones, some of these I am sure were not two tone previously. I have no idea why we are seeing more Carp like this? I don't think it is the stress of the capture, because if this was the case then we would see a lot more two tone fish from all lakes? If you know why or have a plausible theory please e mail me at info@cherrylakes.co.uk . Any help or suggestions will be much appreciated.

Even ignoring the colour of the bigger Common, I have been unable to find this fish in my catalogue of 30lb Carp from Cherry Lake in 2019. As such it is our 33rd different carp over 30lb this year. The photo quality of the 31-01 Common is not good enough for me to be sure if it has been before this year, and so I have not added it to the 'catalogue'.

Andrew Perkins has been on his third visit to Cherry Lakes this week and has been staying in Pochard Lodge with his 'boys' Ben and Luke. To date they have shared some 12 Carp, with the biggest a 30-02 Mirror falling to Ben. Now Ben is one of those anglers who seems to have 'Golden Ones'. Last year he manged to catch the only Catfish in the lake, a 60lber, from a lake they were fishing. This year he got lucky again and caught the biggest known Carp in Cherry Mere. I know he thinks he is 'selectively skillful'! I think he's got the Midas touch and I am going to ask him to pick my lottery numbers! Ben becomes the 138th member of the 30+ club and the only family member with a shirt!

and then.....not to be out done by his boys.....Dad Andrew landed a 22lb Mirror. The Cherry Lakes Bio-Fruit boilies doing the business for them all. Well done to the Perkins family!