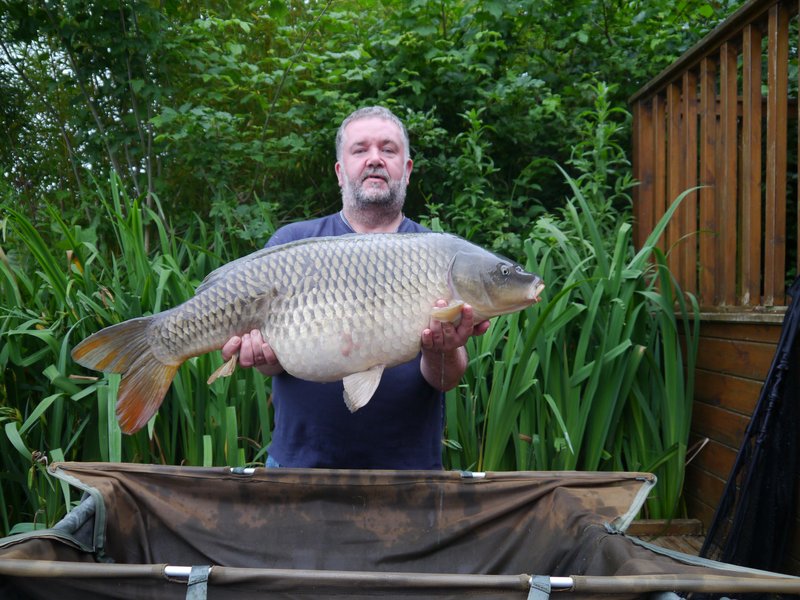 Jason Booth's Common is our 24th different 30lb+ of the year.

Fishing on Cherry Lake has been fairly slow this week following the Carp spawning heavily over the weekend. Apart from a few stragglers we think the Carp have now successfully spawned and after their normal few days rest, I expect them to get back on the feed soon as they replace the lost energy as well as repair the inevitable spawning bruises and grazes! I am very relieved that they have spawned.

We frequently have father and son's fishing together. I think it is easier for dad's to get a 'fishing pass' if they are 'bonding' with their sons. This update is about a couple to two generational 'teams' who have done very well recently on Cherry Lake.

Jason and Harrison Booth stayed in Osprey Lodge for a week, leaving last Friday. This was their first visit to Cherry Lakes and they were celebrating Jason's 50th birthday! The lake fished fairly slowly for the first three days/nights of their stay and had they left on the Monday they would have left with a blank. However they persevered and also kept their spirits up...saying they were just happy to be on Cherry Lake! Harrison was the first to land a PB when he caught a 27-08 from the far margin, I think on Monday. See picture below. Needless to say he was delighted especially as it beat his Dad's PB too.

Jason, as all good Dad's are was very pleased for Harrison and kept plugging away. On Tuesday he landed his new PB and overtook Harrison , when became the 128th member of the Cherry Lake 30+ club when he landed a 30-06 Common. This particular Carp has been out several times this year since Joe Baker caught it in April.

Jason an Harrison were highly complimentary about their stay and we look forward to seeing them both again.

At the same time Jason and Harrison were in Osprey Lodge, Terry Baker had booked out the Cottage. Terry was on a return trip with his godson Jake Sayer and his friend Tom Wytcherley. Their week also started slowly with just Tom catching over the weekend (a 29-06 Mirror). Terry sent me a very interesting report detailing methods, rigs and bait, as well as captors and weights of the Carp caught. Unfortunately it is beyond my computer skills to cut and paste this report. Sorry Terry.

I can confirm they caught 12 Carp between them. Eleven of which were over 20lb+ with an average weight of over 24lb. Top baits were Cell and Krill flavoured fishmeal boilies. Tom landed a 30-10 Ghost Mirror to become the 129th member of the Cherry Lake 30+ club. Even better for him he did so by landing a 30-10 Ghost Mirror pictured below.

Tom also caught several other big Carp including a 29-06 Mirror and this 26-10 Common pictured immediately below. Jake Sayer had 4 Carp with the biggest being this 25-04 Mirror pictured in the bottom photo.

As you can see the 4-5 days leading up to this week's spawning was prolific as far as Cherry Lake is concerned. Well done to everyone mentioned above and especially to our new 30+ club members.