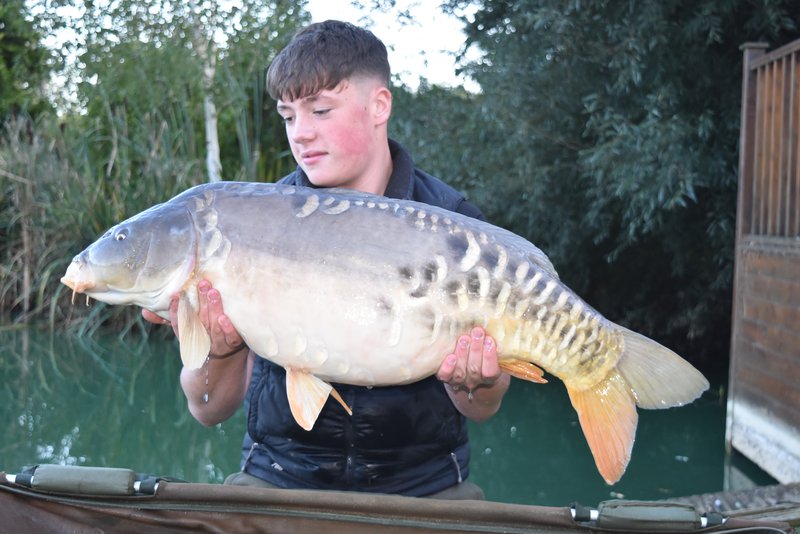 Regular readers of Cherry Lakes Latest News updates might have noticed the recent 'radio silence'. The reason is because I have been away rather than the fishing poor. Indeed there have been some good captures to report. Rather than one long update, I am going to split the update into two, with the first one focussed on Cherry Mere.

Amazingly over the last couple of weeks whilst I have been away, we have had three different winter 30's caught from Cherry Mere. Two of these were repeat captures, whilst the third landed this week by Gary Owen, was a new 30lb+ Carp for the lake.

Gary, and his Dad Rob Owen, are regulars at Cherry Lakes, and we were delighted when they said they wanted to return for a winter visit to Pochard Lodge on Cherry Mere. Gary has a good 'winter record' at Cherry Lakes having caught a 'Snow-Carp' from Cherry Springs previously (see photo two below). Gary and Rob soon worked out that the best method for the Carp was to position their baits close to the opposite margins, fishing single boilies over boilie crumb and it clearly worked!

The first of their two 30's came to Rob. The 32-07 Mirror sets a new PB for Rob and you can see how delighted he is. He is also the proud owner of a Cherry Lakes 30+ club polo shirt as the 158th member of the club. The Carp was too heavy for Rob, so it is being held by Gary. A great Father and Son photo. This Carp was previously caught by Alan Waddington at a similar weight in September

Gary and Rob caught several other lovely winter Carp, all of which were I am told in great condition, including a 24-08 Mirror and 20-02 Common, to Rob. Gary's last fish of his stay was the 30-08 Mirror pictured in the lead photo above. I was particularly delighted for Gary (who has now caught a 30lb+ Carp from two of our lakes), because this beauty is the third different Carp caught from Cherry Mere this year. They clearly fished extremely well and had an excellent result given that the overnight temperature on Tuesday fell to minus -4C with a resulting heavy over-night frost.

Given how well stocked this lake of less than one acre is, I am very pleased, as well as a little surprised, at how well the Carp are doing with the fish continuing to grow. It appears that our programme of feeding coupled with keeping the water well oxygenated is working.

Cherry Mere is an excellent winter water and can produce the odd Carp even in the most difficult of conditions. With Pochard Lodge being our biggest Lodge with two bedrooms and a large living area, it is hard to think about a better place to fish during the cold winter days and long dark nights.

The first of the 30lb+ Carp landed in mid-November was caught by Simon Peach who was on on his first ever visit to Cherry Lakes. I am unclear about the number of Carp that he caught or what his tactics were, what I do know is that he landed the third of the three known Cherry Mere 30's at 32-05. In doing so Simon became the 157th member of the Cherry Lakes 30+ club. This was the same Carp as caught by Alan Burford earlier this year.

It is not completely surprising to me that three of the biggest Carp in the lake should come out in such a short period of time. It is often the case that it is the bigger fish in the lake which continue to feed in the winter. The bigger Carp have the time to get to the bait when it's cold....in warmer water the smaller more active Carp frequently 'beat' them to it!