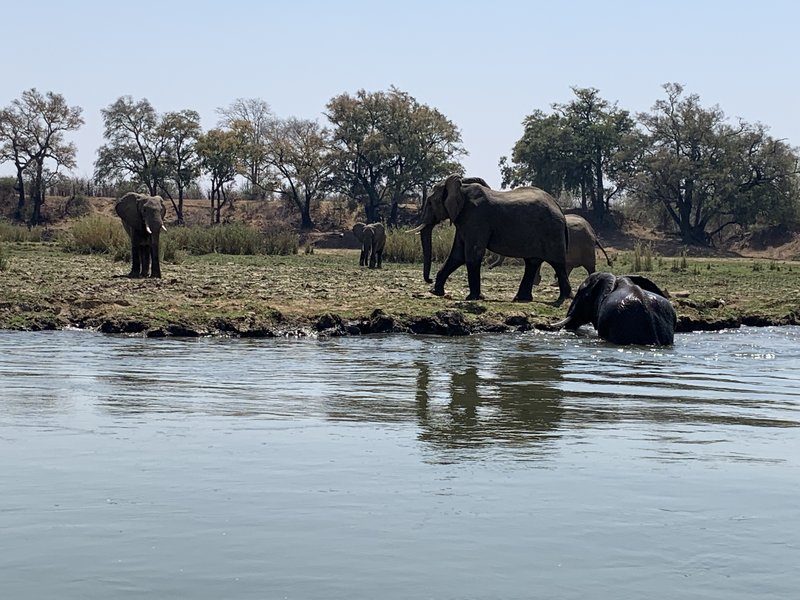 Safari is the reason for my radio silence.

As you may have guessed by the absence of an update in high season.........we have been away. The fishing has been good across Cherry Lakes while we have been away and I will cover this in my next two 'News' updates. I do know however that a good number of our regular 'readers' like to hear of our fishing exploits overseas, so this update is dedicated to this. If you think I am being indulgent then please forgive me.

One of my 'bucket list' species to catch is the Tiger Fish of Africa. Now whilst I have in the past managed to persuade Judith that I should be allowed a fishing trip on my own to some exotic places, when my good friend John Little told me about the great Game watching and Tiger fishing on the Zambezi river, I knew we must go. Fortunately John and his lovely wife Dawn, who we first got to know as Cherry Lake guests, wanted to go again to Zambia, and even more surprisingly they were happy for Judith and I to join them. Thanks to both John and Dawn for letting us join them and showing us the ropes on a fabulous holiday.

We have been fortunate enough to have been on safari before, but I have to say that Zambia was excellent. Zambia has a good reputation for safety, it values both its tourists and wildlife, and English is the official language. Our week in the South Luanga National Park followed by another in the Lower Zambezi National Park was spectacular and amazing. In short I cannot recommend Zambia any higher.

The Tiger fish fishing was good and challenging. The principal methods deployed were (1) trotting down and then holding back on light weights fish baits and (2) drifting free lined fish baits behind the boat gently bouncing along the river bottom.

In truth it took us a little while to work it out the best approach. Getting bites was not the issue, we had plenty of them. Converting these 'nibbles' into more aggressive takes and then getting the Tigers in the landing net was the challenge. Between us we caught 19 Tiger Fish to 12.5lb (on the local scales which we both thought were a little 'harsh!'). We also lost at least the same number. We are told this is at least 'par for the course'.

Tiger Fish, as well as having a spectacular set of very BIG teeth and have a very bony mouth (similar I believe to Tarpen) , meaning it is difficult to find a good hook hold. The most successful approach was to use circle hooks with small chunks of fish on, and wait until the Tiger has essentially hooked itself on a tight line. For those of you not familiar with Circle hooks....these hooks were originally introduced by Japanese long lining fisherman, because once the fish is hooked, it is practically impossible for the fish to get off. You however cannot strike with them. In our case the circle hooks, almost always managed to find the 'scissors' and once the hook was set, then even the acrobatic jumping of the Tiger Fish was not always enough to get them off the hook.

I personally found it very difficult not to strike when the fish was tightening but not yet hooked.......and as a result I managed to screw many of the opportunities up!

A fishing trip on the Zambezi is not just about the fishing, it is also (more) about the fantastic setting. In reality each day on the boat was as much about a river Safari as it was about the fishing, which I have tried to capture in some of the photos below. We saw lots of Elephants on the bank and even swimming across channels between the islands in the river. As you can see from the lead photo above they make very unusual fishing spectators! It was also strange to see swirling in the river and to look up to see not Carp moving but 'HIPPOs'. I have never before been able to use the excuse that 'there are too many Hippos in the swim' before!

Two of the most amazing fishing 'incidents' were not recorded by a camera because of the 'in the moment' experience. John and I were coming to the end of a long drift when an unseen Hippo emerged out of the water right by the Boat no more than three feet from us. It would not be an under-statement say that John and I jumped out of our skins and said a few choice words ! Our fishing guide almost wet himself laughing!

I have several times had a Pike or a Barracuda attack a smaller fish on the way in when playing them, but when a c.9ft Crocodile chased a Tiger Fish that I was playing near the boat, it was a very different feeling. As this is a family publication all I can say is that I reeled the fish in as fast as I could! Only in Africa!

Judith thoroughly enjoyed herself too. When John and I were fishing she would go on game drives with Dawn or on her own (with a guide of course doing the driving and game spotting). She saw some fabulous animals including a pack of Lions including their cubs feeding on a large Water Buck (which is like big Dear), and on another occasion, the same Lions feeding on an Impala which they had stolen from the Leopard which had just killed it. Better still the Leopard for it's own safety had climbed the tree above the kill and was stuck in it until the Lions left. Some truly amazing sights

Judith and Dawn also came out with us for one evening, with Judith being 'top rod' for our short trip. She cleverly decided to give the Tiger's a miss and instead fished with worm. She caught several species including a Bream (which looks nothing like ours!).

Having just returned from such a fabulous experience I am keen to repeat a Safari/Fishing holiday in Zambia, probably in a couple of years time. I also think it might be good to travel with a larger group of up to say 6-8 couples with 6-8 fishing, possibly even derived from the Cherry Lakes guest customer base. Now this would most definitely not be a cheap holiday, but if you think this is something you might be interested in, please drop me an e mail. No commitments at this stage...probably just a pipe-dream but you never know!