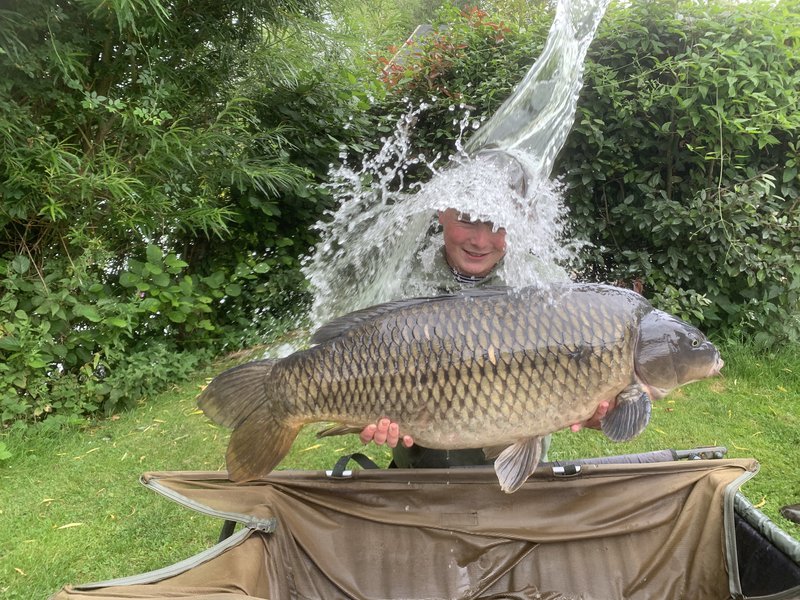 Tom Nixon-Taylor has been on his annual July 'pilgrimage' to Cherry Lakes and as always he has started with a bang!

Tom who is an excellent angler, has always done well at Cherry Lakes and normally stays in his favourite Osprey Lodge. His English PB on arrival was a 38-08 Mirror caught on an earlier visit.

His first Carp was caught a few hours after arriving yesterday (Friday) and was a stunning almost fully scaled Mirror of 30-02 pictured below. This lovely Carp is a new thirty for us and is obviously a younger fish coming through.

Tom's fourth fish was a truly special one. We have been waiting to see 'The Patch' all year. This very long Common is a male Carp which continues to steadily put on weight.

Fishery manager Dave was on-hand when Tom was playing the big Carp. During the fight when the Carp was in the middle of the lake, it rolled and its big black tail could be seen and they both then knew Tom was attached to a special Carp. 'The Patch' looked absolutely massive and in tip-top condition as hopefully you can see from the photos. As you can also see from the lead photo above, Dave could not resist 'christening' Tom with the seemingly customary bucket of water when you beat your personal best.

Tom became the third angler to join the exclusive group of anglers who have the complete set of 30+ Polo shirt, 35+ Hoody and now the 40+ Fleece (Paul Mitchell and Andy Watts being the first two). The Patch also set Tom's new English PB. The successful tactics for all of Tom's Carp so far has been a KARPER baits 12mm/15mm combination snowman over a bed of pellets, crushed boilies and sweetcorn. Tom's fifth Carp (and he is here until Friday!) was this mint Mirror of 24lb+ which I could not resist including here. It is not always about size (as I have been known to say to Judith!).

Well done Tom. I suspect you might also feature in my next update!

Whilst he has been a bit over-shadowed by Tom's 'fireworks', Andy Watts has kept plugging away this week in Heron Lodge and was pleased to land this 31-08 Mirror.. This Carp was caught earlier in the year by Charlie England at 34lb, so it appears that some of our bigger Carp have spawned. Well done Andy.