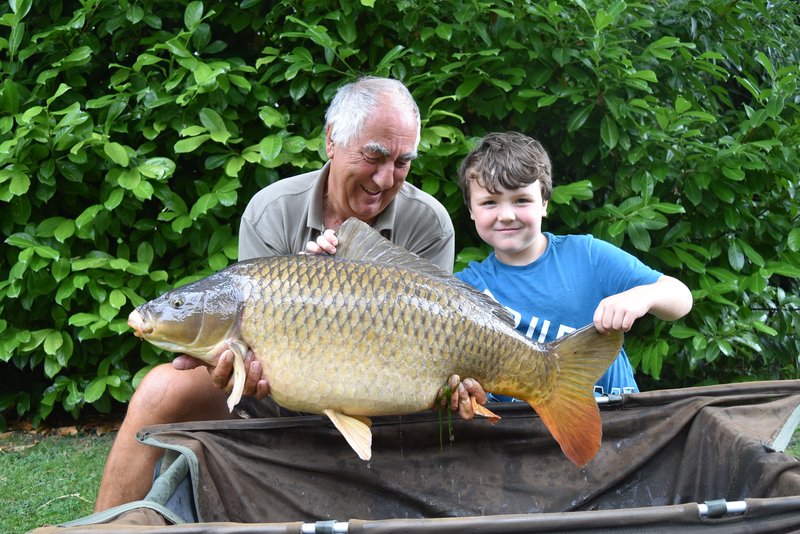 David Hills 28-12 from Cherry Springs is a real cracker too!

Two more 30lb+ Commons to report in this update. I will start with the second of these which was caught by Grandad Steve Shelley from the Cherry Lake Cottage swim. Steve has been spending the week in the Cottage with his family including son-in law Dean Grace and his Grandson Jack Grace(7). In truth it had been a bit of a struggle for Steve who have landed two low 20's and lost two during the first five days of his stay. On Saturday morning I persuaded Steve to stop using his pellets and fish over the pellets which we regularly feed. I also suggested he did not glug these and fish them 'plain' which is how we feed them. As you can see from both the photos above and below, Steve was quickly glad that he did, because within a few hours he landed this lovely 30-08 Common. In doing so he became the 139th member of the Cherry Lake 30+ club. AS you can also see Grandson Jack was very proud of his Grandad and there was no way he was not going to play an active role in the photos!

I thought it was strange that over the last ten days or so Cherry Lake had produced four 30+'s and they had all been Commons. In my head I thought the 30lb+ Mirrors outnumbered the 30lb+ Commons by at least 2:1. Having spent a good hour or so studying this years 30lb+ Commons in my 2019 catalogue, until the two Commons featured here, we had recorded 13 different Common Carp this year. Steve's Common above is a hard one to identify as it does not have any really obvious markings, but I could not find one that looks like it, or has its shape, and so I have added to the catalogue as the 34th different Carp over 30lb.

Rik Huxley had an amazing first visit to Cherry Lake last week (see last article which featured him with 2 x 30+ Commons to 35-04). Well he finished with a bang on Thursday night when he landed his third 30 of his trip, this time again a Common of 31-11. See photo below. Well done Rik on an amazing first trip. We look forward to your promised return.

Rik's last Common does has a clear distinguishing mark on the top of its shoulder on the left flank which I cannot find in the catalogued Commons for this year. Hence this has been added as the 35th different Carp over 30lb in 2019. Of these 15 have been Commons and 20 Mirrors, so much more balanced than I had felt.

I said earlier in the year that I was expecting to get close to 40 different recorded Carp this year, and this target, with the heavy Autumn feeding to come, looks very reachable as more of the bigger twenties come through..

Cherry Springs has been very patchy over the last few weeks and has fished much more like Cherry Lake than it should do with its stock of Carp.The last few anglers reporting that they had to work hard for just a few Carp. Sometimes this lake can switch off. It might be something to do with the fact that it has a lot more silt and blood-worm than the other lakes with the fish getting obsessed with naturals?

David Hills fished on from Kingfisher Lodge on Cherry Springs last week and caught, from memory 8 Carp, including Mirrors of 23lb and this fantastic Mirror of 28-12 below. A Carp which was certainly work the effort and wait, and is David's UK PB. The successful bait was, I think, the Cherry Lakes Dairy Cream boilies. Well done for sticking at it David.