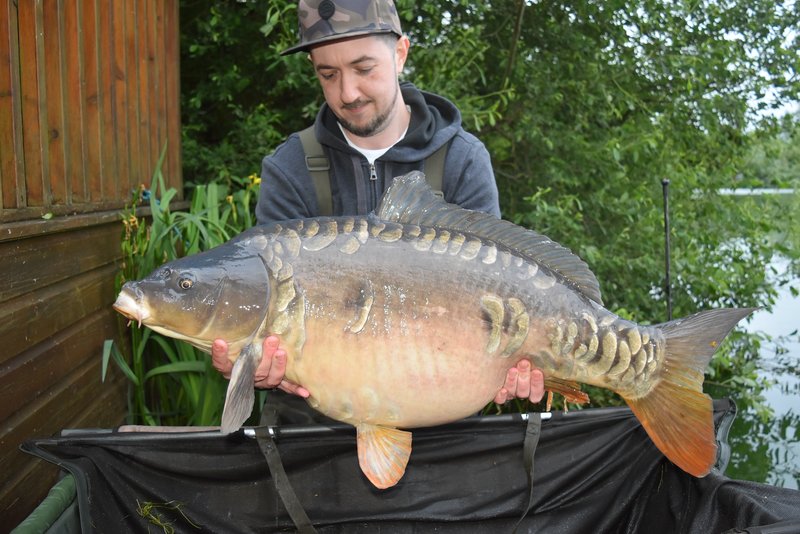 Stephen Martin has not been Carp fishing for 3 years. Just recently he thought it was about time that he went again and at the last minute decided to book himself into Heron Lodge. He is glad he did.

When I saw him earlier this evening he was a little disappointed not to have caught anything. As we stood talking it became obvious to us both that the Carp were feeding hard towards the center of the lake. It must be my age but I get really excited when i see Carp really blowing! I encouraged Stephen to 'keep the faith' and that he was in with a real chance.

Less than two hours later I was delighted to get a call from him. His yellow pop up fished about 2/3 the way out had done the trick. He said I have got a good thirty in the net. I shot around with my trust camera, scales and shepherd's crook. The Carp weighed a little over 34lb and we agreed on 34-01.

I am delighted to confirm that this Carp is another new 30lb+ for us. Out of the 18 x 30lb+ Carp caught so far this year from Cherry Lake 6 are new thirties. At 34lb she was very chunky and did not look full of spawn and has clearly been doing well and not getting caught very often. Well done Stephen you are now the 126th member of the Cherry Lake 30+ club.

Mike Houghton has also done well. He has been staying in Cherry Lake Cottage on his first visit to the complex. After landing a 28lb Mirror, and a lovely 17lb Common, Mike landed a 30-04 Ghost Mirror Carp to join the 30+ club as the 125th member. Mike fished wafters over an attractive combination of crushed boilies and spod mix down the right hand near margin.Well done Mike.

Surprisingly given how well Heron Lodge on Cherry Lake has been fishing, but we have Heron Lodge currently available for next Monday 17-21 June. If you fancy a late break, please call us on 01285 869887