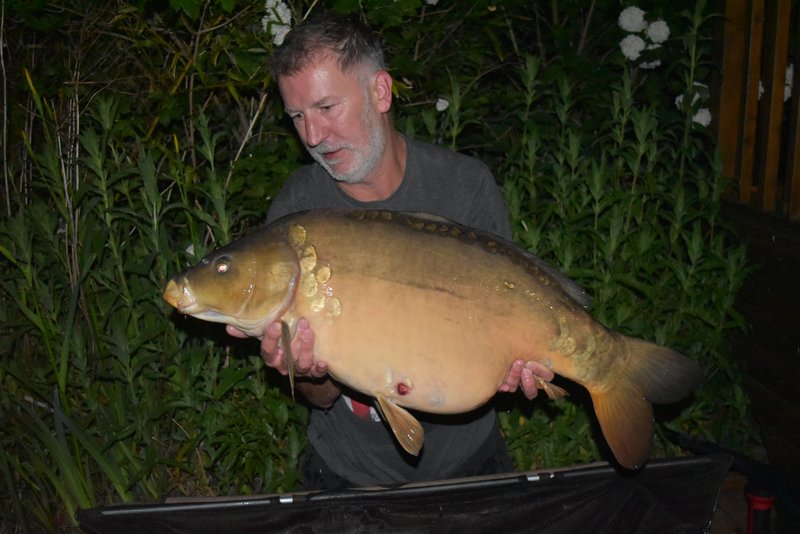 Cherry Lake continued its good form this weekend with a further two 30lb+ Carp being reported by the anglers in Grebe Lodge and the Cottage. We have now had 10 different 30lb Carp caught in 2019 from Cherry Lake, of which four are new thirties. Just ahead of spawning (which I assume will happen over the next four weeks with the next good spell of weather), my guess is there is now well over 40+ Carp above the target 30lb weight mark.

Julian Dwyer has been a regular visitor to Cherry Lakes over the last 5 years. He remarked to me on Friday when he arrived that he has so far caught 41 Carp from Cherry Lake and that he was still not a member of the Cherry Lake 30+ club. As you can see from the photo immediately above he is now a member. I was delighted to receive a very late call last night to go and photo a 31-03 Mirror Carp which he had just caught from Grebe Lodge. This fish was Julian's 4th Carp of his current visit, and therefore his 45th Carp was much desired Cherry Lake 30! This Carp is a new 30lb+ Carp for us.

I must say it is hard to think of someone else who has caught as many Carp without getting a thirty....definitely well deserved. In doing so Julian became the 122nd member of the club and already has his shirt to prove it!

David Lee along with his wife Jane, are also a regular visitors to Cherry Lake. This time he also treated his Mum and so booked the Cottage. David became the 121st member of the 30+ club when he landed a 30-02 Common on Friday afternoon. It was fairly obvious that the Carp were feeding hard when he arrived. However neither of us thought he would catch one so quickly.....he did not even have time to get his second rod out! As you can see from the photo above, this Common Carp is carrying several pounds of spawn. Not surprisingly this is another new 30lb+ Carp for Cherry Lake.

David has also caught 4 Carp so far this weekend, including this lovely 25-04 Common below. This fish was also carrying a fair amount of spawn. In fact in the water we did not think she was very big!