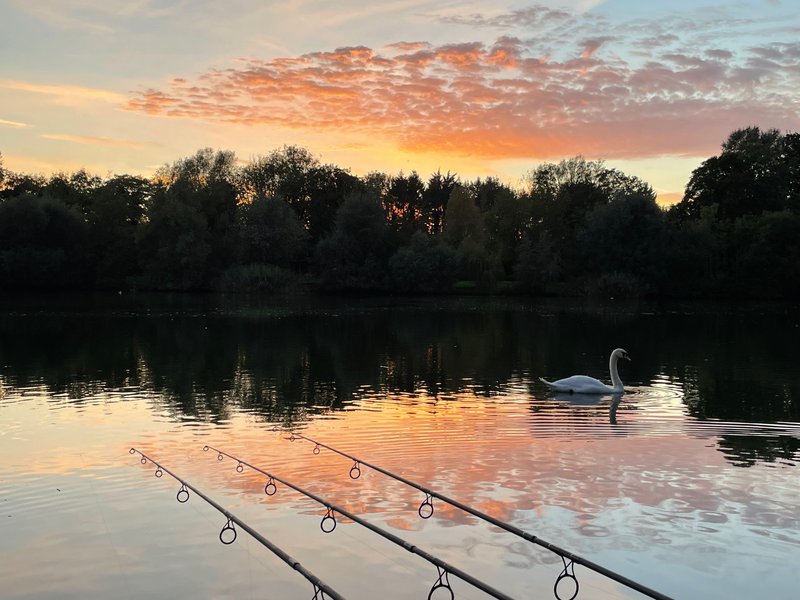 Very tough and a bad back!

You can tell when things are unusually slow when the lead photograph is a scenic one! This one was actually taken by myself when fishing from Osprey Lodge on Monday evening just before my planned session came to an abrupt halt!

I thought I would treat myself to a few days fishing in Osprey Lodge in the hope of getting one or two of the big ones before the colder weather which normally arrives in November. As such I had cunningly held a space back and told Judith I had to fish as it was 'empty'!

Well it remained empty for most of the week. My 'cunning plan' quickly unravelled as somehow I hurt my back during Monday and by Monday night my back was very painful. Indeed as Monday night wore on, I almost unbelievably started to pray that I would NOT get a run!

Fortunately for me this proved to be the case, and Dave reeled in for me in the morning. Heavenly retribution for my cunning plan?? As I write I am still very sore and just about hobbling around..........and evidently I am not much fun to be with!

As it turns out, along with just about every other fishery that I know about, the last week has been painfully slow. The high pressure and stillness of the last week clearly has not been conducive to the Carp feeding. As well as my 'blank' three other anglers on Cherry Lake struggled and had just one Carp between them, plus one lost. At best the fishing has been tough.......or more likely described as rubbish!

With pressure due to drop over the weekend and warm winds for the early part of next week forecast, I suspect it will be a different story for the new visiting anglers.

The other lake's across the complex have been slow, but at least they produced a few, including a brace of 20's to 24lb from Cherry Springs. Top rod this week has been our good friend Terry Ravenscroft, who fished from Pochard Lodge on Cherry Mere.

Terry and his lovely wife of 57 years, Pam, have been long term regular visitors to Cherry Lakes and it is always a pleasure to see them. This time Terry was the star and managed 6 Carp during his stay (which again proves how tough it has been). He left this morning still buzzing from this stunning 26-04 Mirror above. What a gorgeous fish! Well done Terry and see you both next year.

I expect to have more to update you on next time!