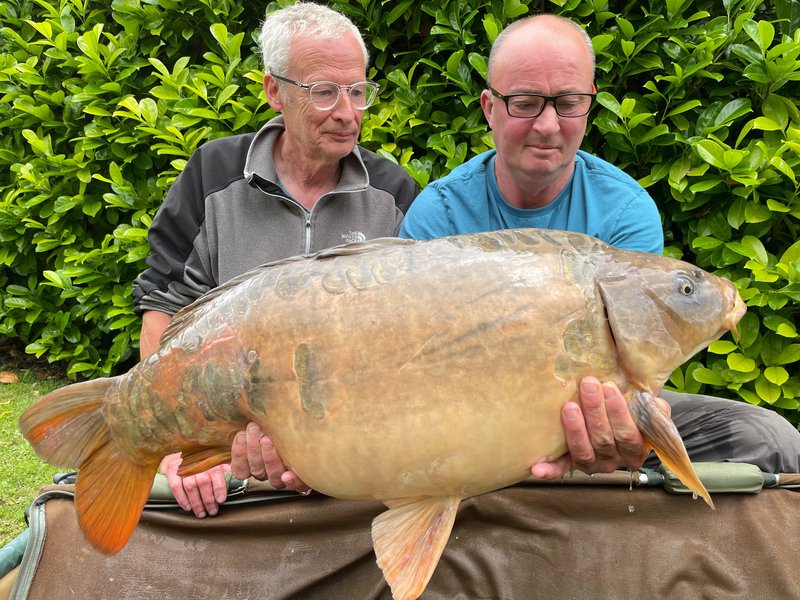 A very strange week across our three principal Carp Lakes. The normally prolific Cherry Mere has slowed down almost to a stop, and Cherry Springs has switched to night time only runs. The strange thing though is that the Carp are active and obviously feeding. The lakes do not appear dead, like they can appear to be at other times when the fish are proving hard to get. Naturals?

I do know form other fisheries that this year the fishing has been tougher than normal. As always as Brits we are blaming the weather!

The situation on Cherry Lake is even stranger. On Wednesday last week we had about 200 Carp massed in the middle of the lake (typically I was offsite for the day). Fishery manager Dave called me to say that it appeared like the Carp were spawning in the middle of the lake. They were tightly grouped and rubbing up against each other (but not thrashing around in the margins like they normally do when spawning). We have a small amount of weed in the middle areas of the lake in front of Heron and Osprey Lodges and Dave thought they might be spawning over this? The weather was overcast and cool like it has been for a week or two. Again not really spawning conditions. Strange!

It is however clear that the Carp did 'release' a huge amount of eggs because anglers have been reporting seeing lots of them in the weed being pulled in. I say 'release their eggs', because it is almost like the bigger Carp had given up waiting for the right moment to spawn normally and knew it was good for their health to simply shed their eggs.

As regular readers know, I was unconvinced that all the bigger Carp spawned either last summer or during this one. This suggests to me that they either shed their eggs or re-absorb them. Certainly some of them shed their eggs. I am disappointed however to report, that literally as I was writing this update we found a dead spawn bound 30+ Mirror. It was difficult to be sure which particular fish this one was, but it was not one of the bigger 30's. This again suggests they were spawning last week. This unfortunate lady however could not and paid the price.

Probably as a consequence of this, the Carp have been really active on Cherry Lake throughout the last week. The lake has been like a Jacuzzi at times and the Carp leaping and rolling. They have not however been interested in anglers baits and this weekend we experienced a complete blank on Cherry Lake (only 4 Carp were caught last Monday to Friday). I cannot remember a weekend in the summer where this has happened. The Carp were obviously pre-occupied with naturals. I think these naturals were Carp eggs! So for the second changeover in a row, we are not going to feed the lakes and see if this encourages the Carp to switch more actively back onto anglers baits (as the naturals dry up).

I thought I would remind myself that some people do catch from Cherry Lake, and run a couple of photos which I overlooked recently (wedding blight!)

The first is a fantastic Ghost Mirror caught by Paul Wilson, pictured in the lead photo above posing with fishery manager Dave. From memory this Carp came in just over 36lb.The second is a lovely Common caught by Jon Drake. Again from memory this Common was 31lb+. Apologies for not running these photos before!

Hopefully next time I write I have some good captures to talk about, some recent photos and up to date information!