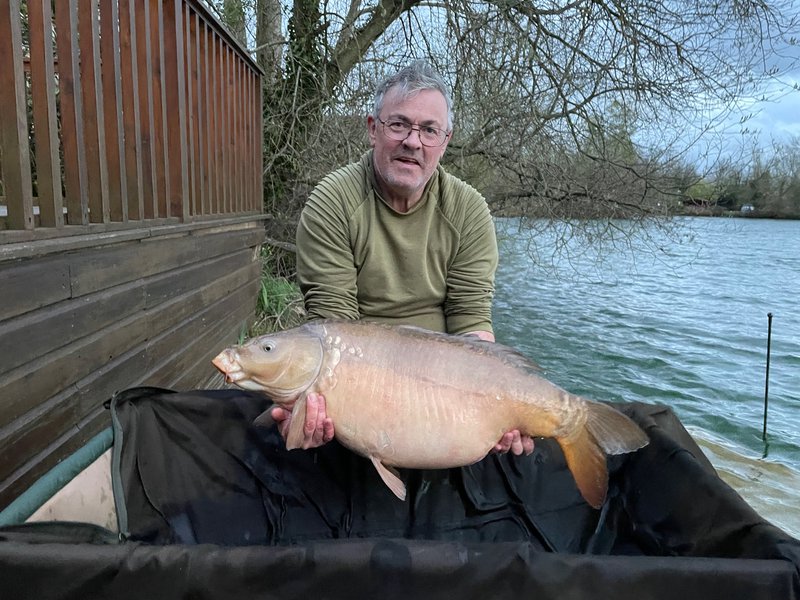 I will admit to be relieved to have something to write about. Last weekend, with two hard frosts was brutal across the fishery, with only one Carp being caught from all of the lakes!

The conditions felt more like late November after the first really hard frosts of the new winter. I really did feel like I was doing the 'walk of shame' over the weekend. All the guests were great and understood they had 'drawn a duff weekend', but it still hurts me to see so much disappointment. I will confess to being slightly worried about the frosts forecast for this weekend coming and hope they don't impact the fishing as much.

Since Monday, fishing has improved slowly. Jason Stevens in Kingfisher Lodge on Cherry Springs started slowly and is now up to 6 Carp to 21-08, including 4 in the last 24 hours.

On Cherry Lake Monday and Tuesday were dead and continued to feel like the weekend. I was beginning to think the Carp had disappeared until Tuesday evening when I saw the first signs of movement. Wednesday brought strong winds and rain. The warmer strong wind was just what the lake needed. The strong blow with its associated back undercurrent, was just what we needed to get some warmth and movement into the water, with the Carp responding accordingly. Carp sightings being evident all around the lake without any pick ups.

Wayne Chawner has been on his second visit to Cherry Lakes this week staying in Heron Lodge. Early on Wednesday afternoon, whilst talking with fishery manager Dave, Wayne noticed some fizzing at about 60 yards, well away from his baited spots. Nothing ventured, nothing gained! Wayne reeled in one of his rods, re-baited with a cut Cherry Lake Dairy Cream boilie finished off with a pink topper, and carefully dropped his bait with just a few crushed freebies in the area of the bubbling.

Twenty minutes later, Wayne had a slow take and he lent into this lovely Mirror of 38-04 pictured above. Wayne smashed his personal best and was still shaking when I arrived to do the photos and help weigh the fish. This Carp made her appearance in my 2021 30's catalogue when caught by Tom Hughes in May. At the time she weighed 36-06, and is up roughly 2lb in weight.

I was taking a stroll around the lake just after 7pm, just four hours after Wayne's first Carp, when I came upon Heron Lodge just as Wayne was landing his second Carp of his visit. This particular Carp is one of my favourites and one which I always look out for. It is a large long and big framed fish which has so much scope for weight gain.

Since September 2019 it has gone from 32-04 to 37-08 when caught by Brian Round last May to 39-08 yesterday, a growth in weight over two and half years of just over 7lb. I think it is a male fish but cannot be sure. Providing we have no disasters, I fully expect this Carp to join the ranks of our 40's over the next 12 months.

This Carp which extended his PB for the second time in 4 hours, came from the same position and same tactics as the 38-04. A fantastic brace of upper 30's. Well done sir!

Wayne's double increases the running total of 30lb+ Carp in the 2022 Catalogue to 18. Almost all of the Carp caught so far are showing steady growth on 2021. I look forward to seeing which of last year's five caught 40's is the first to grace the bank and what weight they come in at. As the weather warms it should get much more exciting!!