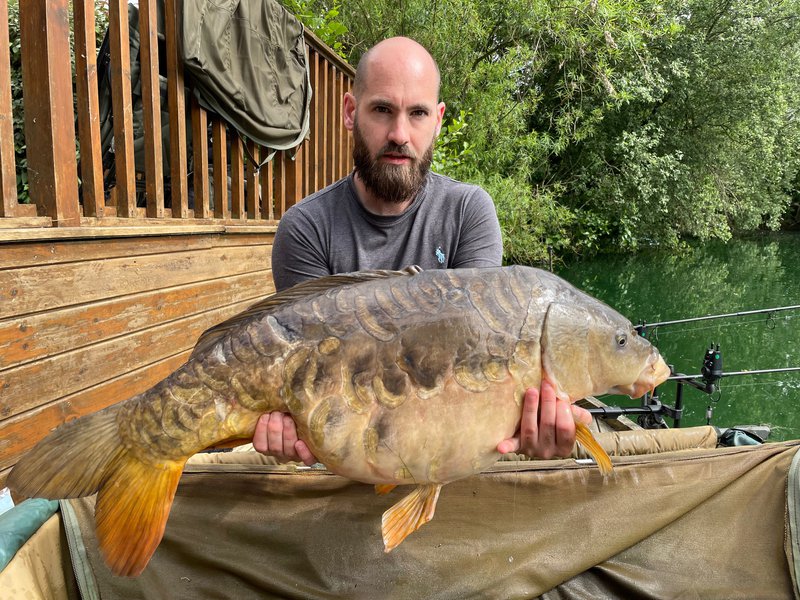 A weekend of Personal Bests!

We have had at least 7 PB's (personal bests) since my last update to anglers fishing all three of the principal Carp lakes.

During last week we had two very keen, and quite inexperienced American Carp anglers fishing from Kingfisher Lodge on Cherry Springs. Fishery manager Dave spent quite a lot of time with them on Monday after they arrived, ensuring they were set up properly and knew how to handle the Carp properly. He also put them onto our Bio-Spice fishmeal boilie which we have been feeding recently.

Now Cherry Springs has been performing more like Cherry Lake recently. The Carp have not always proved to be easy to catch and anglers have had to work at it to do well. As a result I was a little concerned as to how well Greg and Penny would do. Well I should not have worried. Fishing mainly in the middle areas of the lake (around 6 feet deep), and principally baiting with the Bio-Spice boilies on the bottom, they landed over 20 Carp between them including 8 on Tuesday. Penny had a 21lb Mirror and Greg several around 19lb. The biggest Carp represented new PB's for both of them. They reported that the Carp were in good condition except several with some obvious (and repairing) spawning damage. They were unsurprisingly very appreciative of Dave's efforts and advice. Sorry no photos.

Nick Atkinson and his son Alfie returned to Cherry Lakes this last weekend, and this time stepped up to Cherry Mere (last year they fished on Cherry Pool). Predictably the Carp fishing was a bit slower than on Cherry Pool, but they still managed a good handful, including a PB for NIck. An impressive Mirror of 27-12 which looks like it could get much heavier, see picture below. Nick and Alfie also caught their Carp on our Bio-spice fishmeal boilies

The star of last week was Peter Jones (The Tackle Box fishing store manager) who finished his annual holiday at Cherry Lakes with a total of 18 Carp, which included two thirties (see last update for the picture of the 34lb Bronze Common) including 'The Peach' at 33-08, pictured below. This is the first time that this lovely Ghost Mirror Carp has put in an appearance this year. She was caught at a similar weight last July by Paul Mitchell. Very nice and well done Peter. See you next year!

Not only was this last weekend, a weekend of 5 PB's, it was also a weekend of 4 x 29lbers. My favourite Carp of the weekend was caught by Paul Saunders from Osprey Lodge. This stunning Carp smashed Paul's PB, and came in at 29-08. I weighed this Carp twice as it looked comfortably a thirty. It was also a Carp which I had been looking out for since it was caught last July by David Barter at 30-08. As you can see from the lead photo above, she has a lovely scale pattern and appears to have the belly of a 30+. My feeling, as she was a little 'hollow', is that she has recently spawned and no doubt 'return to my 30's catalogue' next time she is caught.

Talking about spawning, which I promised last time not to! We have had small groups of Carp spawning in selective areas of Cherry Lake throughout the last week. Literally no more than a dozen or so at a time. I really do not have any clear idea how many Carp in total have actually spawned and whether this includes the bigger 'old girls'. It might be that this pattern of behaviour (which has stopped for now following the overnight rain) might be all we get this year. It seems unlikely that we will have the mass spawning event all over the lake which we have seen in previous years?

The biggest Carp of the last week was caught by Marc Hansler fishing from Osprey Lodge with Paul Saunders. Marc was telling me earlier in his visit how much he loves big Commons, so he was particularly 'over the moon' with this fantastic Common Carp of 35-08 when he caught her at 02.25 in the early hours of Sunday/Monday night. He also smashed his PB and earnt a 35+ Hoody when he became the 224th member of the 30+ club. A fishmeal boilie did the trick for Marc.

Good friends Tim Sidwell and Alan Fawzey spent the weekend in Heron Lodge and both also had PB's, each with a 29lb+ Common. Amazing! Tim sent me this lovely e mail up following his departure which I could not resist repeating here......

''Thank you so much for a fantastic weekend and you have built a truly amazing place! So pleased we had 2 PB’s and they are very special fish! Sure we will see you again at some point''. A nice way to finish this update!

Well done to everybody who had PB's..