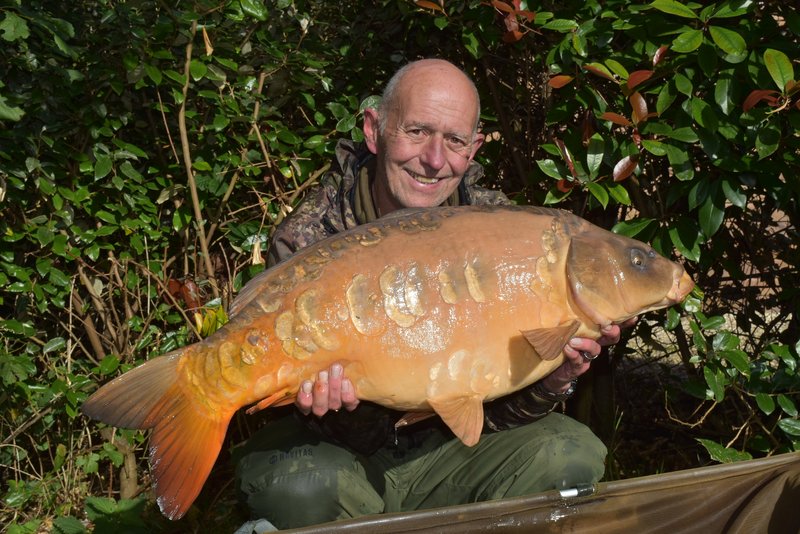 Having visited Cherry Lake at the end of June when they stayed in Grebe Lodge, Lee Jackson and his wife Chriistine could not wait to get back again. I am pleased to say they stayed with us last week and had a great session. This time they stayed in Osprey Lodge. The first 36 hours were slow until Lee switched to fishing small krill baits over hempseed. Lee and Christine shared 7 Carp between them including two thirties.

The first of the big Carp was caught by Christine on Wednesday when she smashed her personal best with a Mirror Carp of 31-04, which she was absolutely thrilled about as you can see in this fabulous photo below. Normally this photo would have been my lead.....but you can see why it was not!

Christine also caught a lovely heavily scaled Mirror of 19lb which also beat her previous PB. Christine joins a small exclusive group of Lady anglers who have caught a 30lb+ Carp from Cherry Lake. When I get bored during a cold and wet day during the winter I will try to track back to confirm how many lady anglers have caughta 30lb+. I think Christine is the 5th. She is also the 154th memebr of the Chery Lake 30+ club and was very pleased with her polo shirt

As you would expect when you are being visited by 'Carp Angling Royalty' (Lee is a former British Carp record holder and World Carp Classic champion), I had several good chats with Lee about all things Carp and fishry management (Lee also runs several of his own fisheries). During one of these conversations on Thursday morning, I said that we were waiting for our 40th thirty of the year and that I had given up trying to count the different Commons and that the 40th Carp would have to be a Mirror. I explained that I was still waiting for several 30lb+ fish from 2018 to put in an appearance. Rather stupidly 'The Peach' was not one of them that I had in mind. It was actually quite a shock to 'discover' that she was not in my 2019 30's catalogue.

Well as you can see from the lead photo above, Lee caught the much sought after 'The Peach', a stunning Ghost Mirror, at 30-14 just before lunch on Thursday. Whilst we have 6 different Ghosties above 30lb, and they are all in my eyes fantastic fish, 'The Peach' is my favourite and I could happily publish a lot of photos of her, but I will limit myself to one of each side.

Lee also caught a Common of 28-08 and a two-tone Common of 21-08. My eye was however caught by this lovely young Common of 18lb pictured below. The tight scale patterns and great body shape hopefully indicates that this fish could become a 'star of the future'. What do you think?

Unfortunately I had to leave on Thursday afternoon and was not around on Friday to say goodbye to Lee and Christine. I did however enjoy their message to me which simply said ' What a great place Mike'!

I look forwards to seeing Lee and Christine next year as they have promised to return.

There have been several other good captures to report, including news about Manuel Fernandez our 155th 30+ club member, but I will save these for my next update.