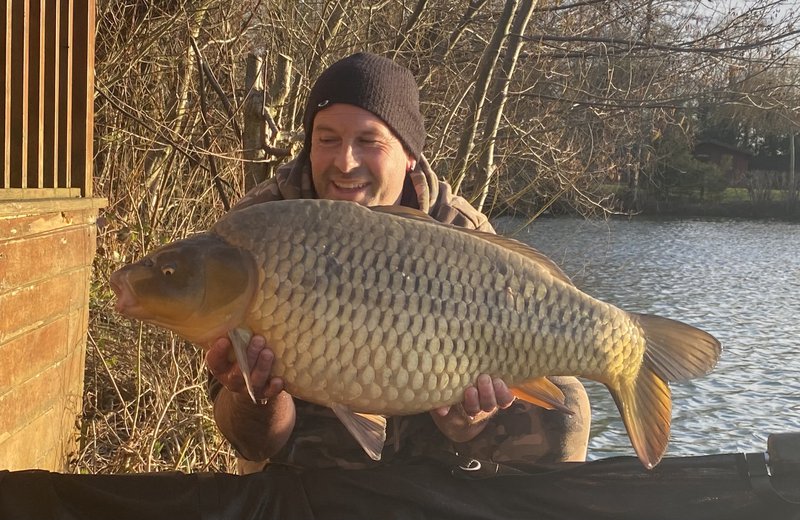 Winter fishing continues to be good-10 different 30's is a great start to the year.

The 2023 calendar has opened with an early booking small deposit offer for returning guests.

Much to fishery manager Dave's relief we returned earlier this week after an extended holiday. Dave explained to me that the fishing had been good over the last two weeks and the weather relatively mild and benign for the first half of February.

Well that's certainly changed this week since our return, with the heavy rain and violent storms since Wednesday. First we had storm Dudley, which was largely good for fishing across the complex, followed by Eunice on Friday and now Storm Franklin tonight and tomorrow (Monday).

So far with the exception of a broken fishery gate, we seem to have escaped any real damage. The annual programme of pollarding the Crack Willows and Alders which grow naturally around the lakes has certainly contributed to this. Once this run of storms finish, we will have to spend some time getting branches and twigs out of the margins. All things considered this would be a good result for us (I just hope I have not spoken too quickly and not tempting fate!).

Winter fishing has been very good on Cherry Lake this winter. The anglers who have visited have often done well. We already have ten Carp in this year's 30+ catalogue. Amazingly three of these are new 30's. So far we have had six 30lb+ Commons. The biggest Common at 38-04 to my fishing buddy Chris Hughes during January (when it was actually typically cold!). We have had four 30lb+ Mirrors, including one of 35-04 to Dave Cole and a 39lb Mirror in early January to Steve Townsend.

I have often observed that it is the Common's which seem to feed first or more regularly in winter. Common's represent about 25% of the lakes Carp over 30lb (17 out of 64 different 30's in 2021) and yet they account some 60% of this years thirties to date have been Commons. Interesting?

Another good fishery friend, Brian Hamilton set a new PB when he landed this new 32lb Common above. This Carp, for obvious reasons has been christened by fisher manager Dave as 'Crinkled Tail'. I recognised the Carp from the photo immediately. In truth I had hoped that the tail fin damage would have repaired, but it seems like it might be permanent. The rest of Carp being perfect.

I had assumed this was a thirty from last year, but on checking the 2021 catalogue, this Carp did not feature. Presumably I saw it last year around the lake when caught and at an upper twenties weight. If you caught this Carp last year, I would be very grateful if you could e mail to confirm it's weight when you caught it. A photo would also be very much appreciated info@cherrylakes.co.uk. Well done Brian. Well deserved.

Jonathan Logan stayed in Grebe Lodge on Cherry Lake this weekend and has done very well, particularly given it has been his first visit in some pretty wild conditions. Fishing small pop-ups over small amounts of bait, he managed three Carp, including this stunning Mirror above of 28lb and Common's of 24lb and a beauty of 31-07, pictured in the lead photo above. The big Carp took a fancy to his small pop-up which was positioned at the bottom of the shallows gravel bar. Both this Carp and the 28lb Mirror came within 15 minutes of each other around 4pm on Saturday afternoon. Obviously a short feeding spell. The big Common set a new PB for Jonathan.

The other angler who did well on Cherry Lake last week was Michael Clements on his second visit to Cherry Lakes. He did well to stay in is bivvy and landed three Carp to 29-04, which is pictured below. Well done Jonathan and Michael.

I will post again over the next couple of days with some great shots from both Cherry Springs and Cherry Mere.

Thanks to the on-going support from our many guests, who both continue to return as well as recommend us, coupled with our strong organic presence on Google etc, Cherry Lakes continues to grow in popularity.

Despite my determination to not open the 2023 bookings calendar until later this year, I have received increasing number of enquiries for 2023. So I have given in and have now opened next year's calendar as well as setting prices.

Demand is particularly high for Cherry Springs and Cherry Mere, we are essentially sold out for this year until November. I am anxious that returning guests do not miss out. So to encourage existing guests to think about returning in 2023, they can secure a 2023 reservation through just an initial deposit of £100. The remainder of the normal 50% deposit being due no later than 6 months before the start date. Please take advantage of this offer to make sure you don't miss out.